An artist who combines public art, works on paper and in textiles, Alice Angus is co-director of arts organisation Proboscis. Alice combines her work on independent projects with work on larger scale projects with Proboscis that include public artworks, academic research, arts and community commissions with partners from government to cultural organisations.

With an interest in social, cultural, natural histories and heritage of places, and a particular interest in landscape and environment, working with The Distillers’ Art has been a natural collaboration for Alice.

“A lot of my work is in response to a site or a place,” Alice said. “I like to get rooted into understanding the place, the people, the rhythms of life and wildlife that inhabit that place and the stories that make it what it is.”

Alice was commissioned to paint Clynelish, a distillery nestled in the valley just outside the Highland coastal town of Brora and created the beautiful ‘Greylags over East Clyne’ to pair with the special Clynelish bottling from our Spirit of Art range.

“I went to Brora just after a big storm in February,” Alice described. “I spent the bright, freezing daylight hours outside from dawn to dusk, watching, listening and drawing until ice froze the paint. I was drawn to Clynelish on the north-east coast because of the combination of people, history, landscape and wildlife.

“As I sat there all kinds life was going on. I was struck by the magnificent skein of Greylag Geese that came honking and barking in from the coast, loudly announcing their arrival, flying low over the flat coastal plain of dykes, ditches and fields, sunlit against the wall of snow dusted mountains. They headed towards the gleaming, puffing distillery, nestled at the base of the hills from where the Clynemilton burn brings its golden water to make the whisky.”

Many of Alice’s projects have been concerned with the human relationship with land and urban spaces. She has a long-held interest in environment and landscape, and between 2003 and 2010 undertook several residencies and commissions in Canada and the Canadian Arctic, exploring issues of landscape, community, language, ownership and belonging. 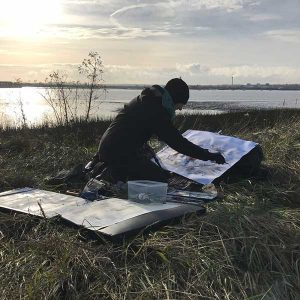 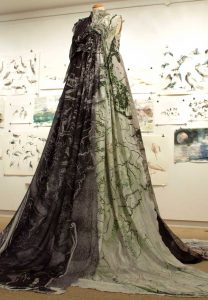